Troy, New York is known as the “Collar City” due to its history in shirt collar production. https://en.wikipedia.org/wiki/Troy,_New_York , Troy was home to an innovator in men’s clothing, Hannah Lord Montague.  In 1825 Hannah, a local resident cut off the collars of her husband’s shirts, bound the edges and attached strings to hold them in place. This allowed the collars and cuffs to be washed and starched separately and revolutionized the manufacturing and laundering of men’s shirts. Montague’s idea changed the fashion for American men’s shirts for a century. The industry grew and was significant in the development of women worker’s rights.

Hugging the Hudson River, next door to Albany, Troy, NY once again hosted the Underground Railroad Public History conference held at Russell Sage College. Last weekend’s (april15 – 17th) three-day program is organized by Paul and Mary Liz Stewart and 2016 marks their 15th annual conference. The couple’s stated aim is “. . . to continue to plumb the depths of this inspiring work for justice engaged in by those who participated in The Underground Railroad Movement.” http://undergroundrailroadhistory.org  Once again, a lively mix of academics, local historians and scholars of the subject came together for a weekend of talks, books on the subject, tours to historical sites (http://bit.ly/1SmGBSu , a keynote speech by the distinguished professor of History and Africana studies at Colgate University, Graham Russell Gao Hodges. He’s the author of, “David Ruggles: A Black Abolitionist and the Underground Railroad in New York City.” http://unc.live/23LDDBQ.

Many thanks to Dr. Paula L. Poulin for pointing out the commemorative memorial for Sojourner Truth in The Town of Esopus, NY. We stopped off to see it on the leisurely ramble southbound on route 9W to reach home.

at the Sojourner Truth Memorial in the Town of Esopus, NY. 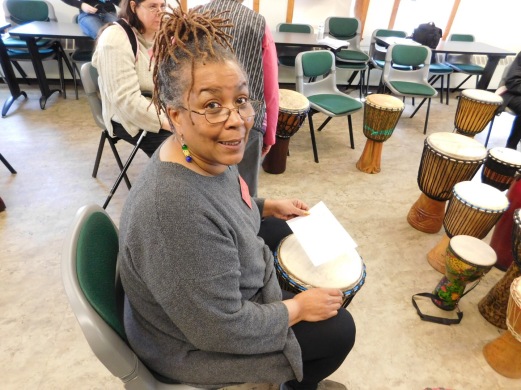 sitting in with the Million Women Drummers at The Underground Railroad Public History Conference in Troy, NY. What an invigorating session